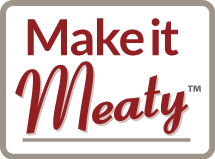 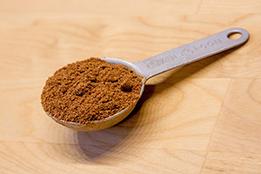 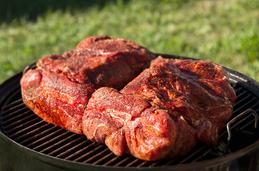 Culinary Flavors and Injections for BBQ and more...

Everybody has their own tweaks and preferences, but here are some of my techniques for using Make it Meaty to get you started.

This guide assumes that you have read the directions on the package, but you want to know more.

First thing to realize, as listed above, is that this isn't rocket science. There are loads of myths, rumors, misinformation and outright hogwash out there on how to use "injections". The truth is, while you do need to know a few things, it's not something you need to over-think. You don't need to know any secrets. There's nothing magical or mystical about these things. I would advise you to concentrate on developing amazing flavors to add to your injection, as opposed to searching for some holy grail.

NOTE: Make it Meaty is best mixed fresh, just before injecting. I've heard some poppycock going around the web that you need to mix, then wait four hours. This is ridiculous, and I don't know where it started. If that were the case, I'd put it on the label. In fact, letting it set that long allows the pH of the phosphates to begin working on the other ingredients, possibly compromising a consistent pH and dissolving the other ingredients like soaking them in lye. So, mix it with cold water, then inject it.

​If you want a "quick start", skip down the page to "INJECTING PORK RIBS" etc...

It's none of those. Well, technically, it's a marinade, but not like any you've used before. It's a brine, too, but not in the way you probably are thinking. It's not "the same" as anything else on the market. There are no specific protein flavors like beef or pork--you can use it on any meat. Because of that, you make it your own...add broth, spices, extracts, soup bases, whatever you like.

"So it's just an injection?"

Well, I have no idea what that means to you. When my father invented this market, people needed a name for it, so a lot of them started calling his product "an injection". The trouble with this is that you can inject anything. It's not descriptive of the flavor, enhancers and other things in Make it Meaty. You can inject chicken broth into your BBQ, but it's not in the same classification of products. If you think Make it Meaty is just like some other product, I assure you, it's not. I spent a long time developing this product precisely NOT to be like anything else on the market.

How much do I use?

The short answer is, "as much as it takes". Not trying to be evasive, but it really depends on so many factors, I can't just say, "a pint", etc. It depends on your technique, the particular meat, and other factors. The goal is to get complete penetration into the meat, with an even distribution, so...as much as you can. If you're trying to save money, skimping on injection isn't a good way to save money. Buy in bulk if price is a concern...there are big discounts for larger quantities, because the packaging costs more than the product.

As a rule of thumb to start a calculation, the amount of water a piece of meat can pick up is about 10%, by weight, so that's the theoretical max. For a five-pound brisket, that would be about a cup of liquid, because a cup weighs 8 ounces, and that's a half a pound (a pint's a pound, the world around!)

In the field, I don't think that works so well, because it's hard to be that precise. Some people actually do mix a cup to inject a brisket. In my opinion, that's just not enough, but your experience may be different. I usually mix at least a quart, then use as much as I can. There are a few problems with a small amount, like 8oz for a brisket, that I see:

As in all things, your mileage may vary. If a cup works for you, great, but I would encourage you to try the "inject as much as you can" method to see how it works for you. The meat will only take up as much as it wants to, so no worries about "over" injecting.

Commercially, marinades like this are incorporated into meat very precisely through needling and vacuum tumbling. Vacuum tumbling allows for very precise measurements, allowing an exact amount of product to be fully incorporated into the meat. While small tumblers are available, it's not really practical to use this method in the field, so we tested a variety of formulations and injection/marination techniques, arriving at the final formula for Make it Meaty.

So, if you ask me how much to inject, I'll tell you, "as much as you can." Excess will drip or boil out as the meat cooks, so it doesn't hurt, unless you fill a big pocket or void with a lot of liquid. That's not good technique. Personally, I use a two quarts of Make it Meaty when I inject a brisket, and I soak the brisket in the remainder that I don't inject inside. I use a 4XL Ziploc bag and throw it in a cooler with some ice, and I let it sit overnight. That works for me.

If you're trying to use as little as possible on account of expense, try using less and see if it makes a difference, but again, I don't recommend mixing less than a quart. If you think you're spending too much on your injection, buy in bulk! The five gallon bag is a real bargain, compared to the quart pack. If you really need a lot, ask about larger buckets.

Make it Meaty works very well with a few tablespoons of our natural flavors, like Simple Beef, Chix Mix, and Savory Premium yeast extract. Add fruit juice or your own concoction. Just be careful with commercial products that contain other enhancers.

Make it Meaty is designed to be mixed 38 grams per quart of liquid, or about 4 level tablespoons. Weight is slightly more accurate, but most people don't notice a difference. 4 tbs is a few grams too much, but it's within specifications.

Add up to a 1/3 cup of your favorite spice blend per quart. We especially like 3 EYZ rub for pork and beef, available in our store. Before adding spices, it's helpful to grind them into a powder using a coffee grinder or with a mortar and pestle in order to avoid clogs.

Make it Meaty works over a wide temperature and pH range, so it plays well with a variety of liquids, like apple juice, broth and vinegar when mixed just before use. If your additions are very acidic, you may wish to use a little more Make it Meaty or add some PhosThis phosphate blend. Experiment to find your personal preference. Because it has a high pH, Make it Meaty should be mixed immediately before using. While it will last a week in the refrigerator in terms of food safety, the phosphates will degrade over time, becoming less effective. If you think about it, this makes sense. With a pH greater than 9, phosphates are more like lye than salt. The best practice is to mix with water (or other liquid) then immediately inject. Once injected into meat, you needn't worry about pH degradation, so you can inject as far in advance as you like.

Because it retains up to 10% more juices, Make it Meaty can increase cook times, so judge doneness the old fashioned way, and not just by temperature until you re-calibrate your timing. For example, use an instant thermometer to probe a brisket, and check the bones in a rack of ribs with a toothpick.

With all methods, it's important to agitate the meat and solution a few times while marinating. This helps to ensure even penetration when the meat might be touching the side of a container or another piece of meat. With chicken, for example, give the container a good shake and rotate it a few times to get things moving.

Make it Meaty is stable and effective over a wide range of pH, but for consistent results, it's best to mix just before using. If you need to mix in advance and store, we suggest freezing into ice cubes.

Here are the methods that work well for us. Your mileage may vary!

​No time to inject? Too laborious? Just don't feel like it? You can soak ribs, and it's often "good enough". It's certainly better than nothing! Soak about three racks in a big ziploc bag with a gallon of Make it Meaty and a cup of your favorite rub. Let it soak overnight and give it a shake every now and then.

There are two methods we like when using Make it Meaty with chicken. Try both to see which you prefer.

If you want more brothy, meaty flavor for your chicken, add 1-3 tablespoons of Chix Mix chicken-flavored yeast extract or even Savory Premium yeast extract to the injection.

Mix a quart of Make it Meaty per bird. Using a large injection needle (we like the LEM 4oz model), inject each breast three to four times at different angles, making sure that no less than one-inch is between any point of injection. Inject the thighs two to three times, at 1-inch intervals. Inject each wing, being careful not to pool up the solution between the meat and skin.

Injecting game is similar to the techniques above. We've tried Make it Meaty on venison, elk, antelope and mule deer with excellent results!

Sausage and Other Ground Meats